Grainwaves is a consultancy which will help businesses to become plant-based. We are a non-profit organisation, here to create a more sustainable planet. Our vision is to connect organisations and businesses worldwide to help each other. We do this by providing ‘Networks’ that connect specialists and plant-based businesses together. Find out more about our Networks and how to sign up here.

Grainwaves is made up of an eclectic group of people from around the world. We are predominantly volunteer-based and all work hard to create a more sustainable and ethical world.

I have been an advocate for animal welfare since my teens. I read a book then called Slaughter of the Innocents by Hans Reusch. After reading it, I immediately became vegetarian and remained so for animal welfare reasons until 2018 when I realised the cruelty of the dairy and egg industries and became vegan.

I am therefore delighted to be involved in Grainwaves where I can work to move forward from merely the cessation of animal cruelty to the very positive step of helping businesses change to plant-based alternatives. 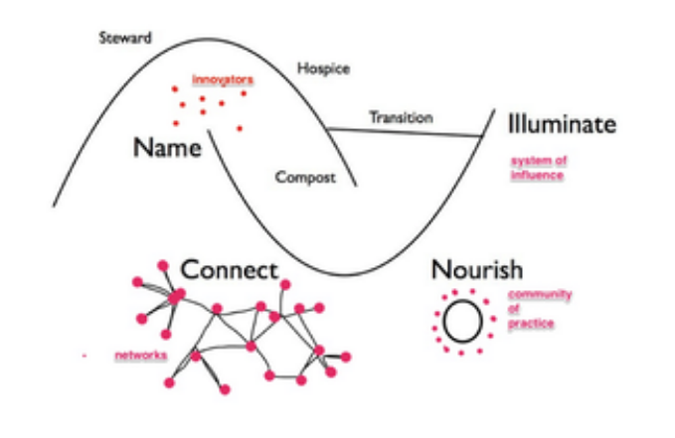 There is a theory of change called Two Loops. It proposes that the old system rises and then declines. As it does so, the new system starts under the apex of the old. There will be those who cannot let the old go (Stewards) and those who join the new. As the new develops, various stages are reached. I have been involved in many groups in the Connect and Nourish sections. Grainwaves, I believe, represents a bridge (Transition) to the stewards clinging to the (Hospice) old views that animal cruelty is acceptable or even essential, to show them there is another way. I sincerely hope that many will cross that bridge, bringing an end to much suffering, both of animals and of humans (whose consumption of the animal products leads to a plethora of illnesses).

I have been interested in environmentalism since the 70s. For the last 10 years I have been pushing for a transition away from animal agriculture and fishing because of the devastation both are causing to the planet and to human health. Thankfully this is being recognised more by the mainstream these days with many wise farmers moving to the more sustainable systems that don’t damage life.

In my leisure time I enjoy music and table tennis.

I have been heavily involved with a variety of plant-promoting groups since becoming vegan. From those that advocate change for animal rights to others, such as Challenge 22, that help support new people making the transition, I wanted to help everywhere I could.

It became apparent to me very quickly that there was little to no support on the commercial side of things, for those organisations and businesses that - whether for ethics, environment or simply economically - want to transition away from profiting on the back of animals.

Grainwaves is here to fill that void and I am thrilled to be working with such amazing people, all pulling together to see this vision come to fruition.

The future is ever-evolving and through Grainwaves, we can help to make it a kind, just and sustainable one.

I’m from Newcastle upon Tyne in the UK. I enjoy helping others which is why I chose employment in the NHS for the blood service.

My environmental impact has always concerned me. It became apparent that if I wanted to become environmentally friendly, I would have to adopt a vegan lifestyle. Through time, I realised how much of a difference I could make; not just for the environment but also to my health and of course, the animals.

I am also involved in Challenge 22, which helps people wanting to try a vegan lifestyle. I have been fortunate to meet lots of great people and helped many transition to veganism.

My involvement in Grainwaves has been really rewarding as together we can make a real difference. I really look forward to helping businesses with this change to a more sustainable future.

If you would like to join the team, or support us in other ways, please let us know.